Take an in-depth look at the buildings, businesses, and people that helped shape Little Rock’s history. Focused on a 23 block area in downtown Little Rock, researchers have compiled maps, historic photos, newspaper articles, biographical information and more into a seamless interface that allows users to explore Little Rock throughout time.

About the Project Launch Application

There are three principal routes that a user can take for exploring the current site: Browse Map, Browse Media, and Browse People or Entities. Once a building (Browse Map), photo (Browse Media), newspaper article (Browse Media), or person (Browse People or Entities) is selected, the details for that item are displayed. Within the details page are two additional buttons, Connections and Connections Map. The Connections button lists all of the people, media, events, buildings, lots, and points of interest that are related or connected to the selected item. For many of the connected items, the user is able to select the drop-down for that item and see how the features are connected. Finally, the buildings, lots and points of interest that are connected to the selected item can also be viewed on a map by selecting the Connections Map button. The Connections Map provides a spatial representation of all items that are connected to the selection. Regardless of how a user chooses to navigate the site, they are able to explore a complex set of connections between the people, buildings, and primary source documents associated with Little Rock's history. Start exploring now!

The Historic Little Rock Mapping project takes an in-depth look at the buildings, businesses, and people that helped shape Little Rock's history. Focused on a 23 block area in downtown Little Rock, researchers have compiled maps, historic photos, newspaper articles, biographical information and more into a seamless interface that allows users to explore Little Rock through time. The map-driven interface is interactive and spans over 100 years of history from 1820-1930. Select a year to see which buildings were present, then select a building to explore and learn more. Next, select the Connections button to see the people, events, photos, and other media related to that building. All of the information presented here is interactive and interconnected allowing users to enter a rabbit hole of early Little Rock history.

Originally developed as a research tool for the Historic Arkansas Museum, this project began as an attempt to weave together historic resources including maps, primary source documents, historic photos, and biographies into a system that allows connections between those resources. For example, we might have a photograph of a building, a newspaper article that discusses a new business moving into the building and a photograph of the building owner. Our goal was to tie all of this information together into a single relational database with a public user interface.

The process began with historic maps such as Sanborn Fire Insurance Maps being brought into a modern, digital mapping platform known as a GIS (Geographic Mapping System). Buildings were drawn or "digitized" from these maps and information such as building use, business name, number of floors, building materials, etc. was recorded from the maps in a system database. The result is a building footprint that, when selected, will list all of the information associated with that building. By storing this information in a database, it is also searchable. See the example below to see the details recorded for the Capital Hotel building drawn from the 1886 Sanborn Fire Insurance map. 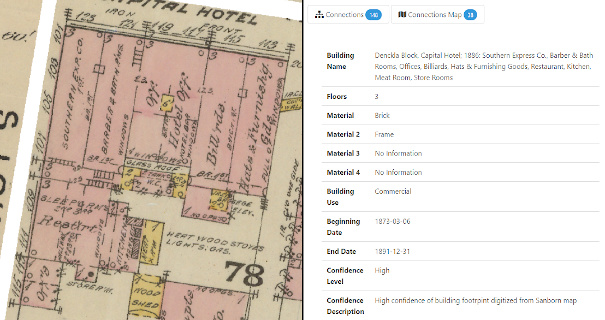 The 1886 Sanborn map is one of the earliest known map of Little Rock with precise building locations. Buildings shown in the early to mid-1800s were digitized largely based on information collected by Margaret Smith Ross. Ross worked for the Arkansas Gazette for 27 years where she wrote a historical column titled "Chronicles of Arkansas" from 1958-1968. She was associate editor of the Arkansas Historic Quarterly and held a number or memberships in various genealogical and historical associations during her lifetime. She was an avid historian, researcher, and collector of Arkansas-related historical materials and her collections have been preserved and are now held by the University of Arkansas Special Collections (Margaret Smith Ross Papers, MC1587). Of particular note from her collection are a set of index cards that have information organized by city block pertaining to historic properties in Little Rock in the 1800s. In her research, Ross systematically recorded information (see example below) from historic newspaper articles, deed books, court cases, and more pertaining to early business/building locations in Little Rock. For this project, information from the Ross cards was recorded in the system database and used to create additional building footprints for buildings in the early- to mid-1800s. It is important to acknowledge that the data from this time period is largely incomplete and only represents buildings that were referenced in the Ross cards or in other historic documentation that has been gathered for this project. This research is a continual work-in-progress. 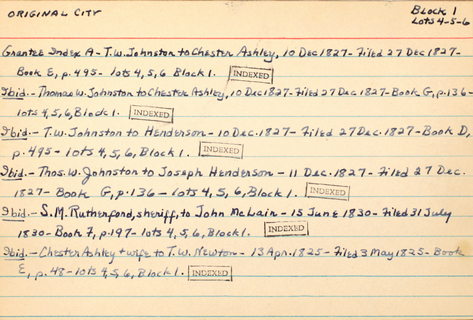 In a second phase of the project, hundreds of historic photos, postcards, and newspaper articles were added to the system database. All of the building photos and postcards were positioned on the map at the approximate location where the photographer would have been standing when he/she took the photo. A field of view showing what could be seen in the photo was also included and If a building(s) was located within the photo field of view, then the photo was linked to the building and vice versa. The same applied for newspaper articles. If a newspaper article referenced a specific building then the article and building are linked in the system database. 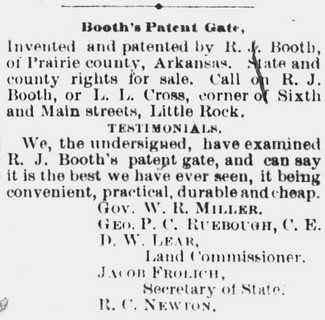 Finally, information about people was added to the system. This began with references to building owners and occupants in the Ross cards. If an individual was associated with a building, they were often connected to that building through a building event. People could also be associated with a building through photos (i.e. a photo of a person in front of a building) or newspaper articles (an article that references a new business/occupant of a building). Finally, biographical information and photos of people were added where available. Again, this project is a work-in-progress so there are many places where there is currently no information available, however there are placeholders so that this information can be added by researchers in the future.

for providing source material for this project.